by Vic
in Business
6 min read
0

“You’re going to Bloomingdale’s with Julie? That’s like cheating on Rachel in her house of worship,” Chandler Bing says to fellow “Friends” character Monica.

That two-decade old joke would not work today. The Rachel Green character, whether sporting mini-barrettes and spaghetti strap dresses or not, would more likely be shopping at home, on her computer, with a glass of wine.

Of the victims of the retail upheaval, department stores have been among the hardest hit. Annual sales at U.S. department stores fell 20% from 2017 to 2018, and sales are on pace to fall even further this year, according to the U.S. Census Bureau. Over the past few years, Bon-Ton and Gordmans liquidated and Sears went bankrupt.

The pressure isn’t abating. Barneys earlier this month filed for bankruptcy, while J.C. Penney is working with restructuring advisers to tackle its debt-load. Shares of Nordstrom are down more then 38% and Macy’s are down 35% so far this year. More than 1,000 department stores have shuttered over the past decade.

“We are in the middle of a department store shakeout,” said Michael Dart, a partner at A.T. Kearney and author of “Retail’s Seismic Shift.

If you haven’t been in a department store lately — and you aren’t alone in avoiding them — you might not have noticed they are slowly dying. And the looming question is who will survive.

To a degree, the pressure these stores are all facing is the same: as the retail industry has transformed over the past few decades, department stores’ greatest strength, size and scale, have become their greatest weakness. Department stores are the retailers with the biggest footprints, which limits the ability to react.

Today’s shoppers like their shopping personalized: shoes for the working urban woman, pants for the stay-at-home mom. Department stores, though, are mass oriented — they stock colors and fashion most likely to appeal to a broad set. Their vast footprints across the United States mean it’s difficult to tailor products regionally.

A man checks his phone as he walks past Macy’s flagship store in New York City.

Retailers have tried to adapt. Macy’s is adding a curated retail concept, Story, to 36 stores across the country, including at its Herald Square flagship. It’s also launched Market @ Macy’s, a pop-up shop within its stores, which features local designers.

But even that has challenges.

“Market was wherever [Macy’s] thought they would have the most overall foot traffic, but not the best area for each brand,” said Dee Murthy, CEO Menlo House, owner of shoe brand New Republic that took part in Market.

In 1969, Bloomingdale’s took a bet on a new men’s line called Ralph Lauren. It was the first time it extended a brand an in-store boutique. The brand soon became an iconic part of American style, synonymous with laid-back luxury. Last year, Ralph Lauren CEO Patrice Louvet closed about a quarter of its U.S. department store distribution during its fiscal year.

Ralph Lauren is by no means alone. Brands from Michael Kors to Coach are weaning their dependence from department stores. There is a multitude of ways for a brand to control their own destiny to reach a variety of customers, from outlet stores to freestanding shops in malls, and of course, their own websites.

“The reality is, storytelling, merchandising and TLC, that doesn’t exist anymore,” said Murthy. “Brands don’t get that kind of power from the retailer.”

The exception, Murthy noted, may be retailers like Bergdorf Goodman or Nordstrom, which still have strong customer service and stores outside the mall.

Instead, brands are building out websites or keeping some of products for their own standalone stores. Lululemon, a brand that may have relied on a retailer like Bloomingdale’s decades ago, ended 2018 with 440 locations globally and has plans to grow further this year. Digital brands like Warby Parker have side-stepped department stores nearly entirely, making it a point of growing through building out their own stores.

An employee restocks clothes on display at the Lululemon Athletica sports apparel store on Regent Street in London.

Staple department store brands like Pucci and Nanette Lepore also are allowing products to be sold at outlets and off-price retailers like T.J. Maxx, which offer shoppers cheaper products and a chance for discovery that a department store cannot. Macy’s, Nordstrom and others have tried to replicate the experience with their own off-price stores, Macy’s Backstage and Nordstrom Rack.

“I try not to go to department stores too much,” said Brianna Ryan, a 22-year-old Pilates instructor in New York City, noting the number of thrift stores in Manhattan.

She last went a major department store, Bloomingdales, about a month ago, in search of new workout clothes. She left after she found the prices too high.

“I found a pair of white leggings that looked exactly like Lululemon from T.J. Maxx,” Ryan explained.

As other department stores have fallen victim to these forces through bankruptcy or liquidations, like Sears and Bon-Ton, that business seems to have evaporated not shifted.

After Sears filed for bankruptcy last October and closed a number of its stores, investors expected J.C. Penney would benefit, thinking former Sears shoppers would head to Penney instead. That never materialized. Instead, Penney is hunkering down even further. It stopped selling appliances this past winter. It closed stores and has hired external advisors to look at options for restructuring its debt.

Employees assist customers at the checkout counter of a J.C. Penney store.

In the absence of a quick fix, several retailers are seeking to shield themselves from the public spotlight. As a private company, a retailer can make tough changes, like closing stores or investing in technology, without the whipsaw reaction of the public market.

With private equity so recently burned by their retail binge in the 2000s, the companies with the best shot are those that already have significant inside ownership — and a pitch for why they will be the ones to survive. Two efforts are already underway.

A group of Nordstrom family members that own a significant stake in Nordstrom have been working on a proposal to increase their stake in the department store to more than half, people familiar with the situation tell CNBC. 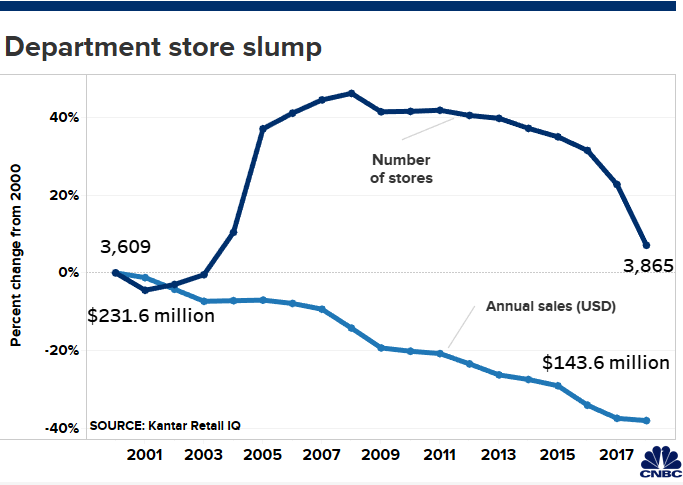 The proposal comes more than a year after the company was forced to abort talks to taker retailer private. A special committee of the board rejected its offer of $50 a share. Shares of the retailer have in recent weeks slipped more than $20 below that offer. Proponents of the department store say it has stronger relations with brands than its peers, as well as a smaller footprint in better locations.

Nordstrom did not immediately respond to a request for comment.

Meantime, Richard Baker, executive chairman of Saks-owner Hudson’s Bay, is leading a bid of shareholders that collectively own 57% of the company to take the retailer private. Shares of the retailer, which also owns Lord & Taylor, had fallen nearly 50% in the year through June 10, before the consortium launched its offer.

The offer though, has already faced pushback from a special committee appointed to evaluate the deal, which has called it “inadequate.”

The offer of 9.45 Canadian dollars ($7.12) a share represented a 48% premium to Hudson’s Bay’s closing share price its last trading day before the offer was extended. Still, Hudson’s Bay CEO Helena Foulkes only last year pegged the value of the company’s real estate at $28 Canadian dollars per share. That’s roughly three-times the offer put forward by the the Baker-led consortium.

Still, retail has gotten harder in the past year, and Hudson’s Bay has hived off assets, including its European department store, Galeria Kaufhof.

A Barney’s store stands in lower Manhattan on August 06, 2019 in New York City. Barneys, one of America’s most exclusive clothing stores, has filed for bankruptcy.

In a letter released earlier this month, Baker and the other shareholders made their case to take the company private, saying the landscape for retailers “poses serious threats” to the value of its business and real estate.

“We believe that the business plan and value creation initiatives required to address these challenges will be better understood, accepted and executed by patient capital in a private company context,” they wrote.

The investor group pushed back on speculation that, as a private company, Hudson’s Bay would return the retailer to the real estate roots of Baker, a New York real estate investor, abandoning retail all-together. Hudson’s Bay sold its iconic Lord & Taylor Fifth Avenue store to WeWork earlier this year.

And now investors are asked to take their bets.

“There will be survivors, I think Nordstrom is one of them, but the jury is out on who will be the others,” said A.T. Kearney’s Dart.