Thai King reinstates his royal consort after declaring her ‘untainted’

by Makayla
in Asia
5 min read
0 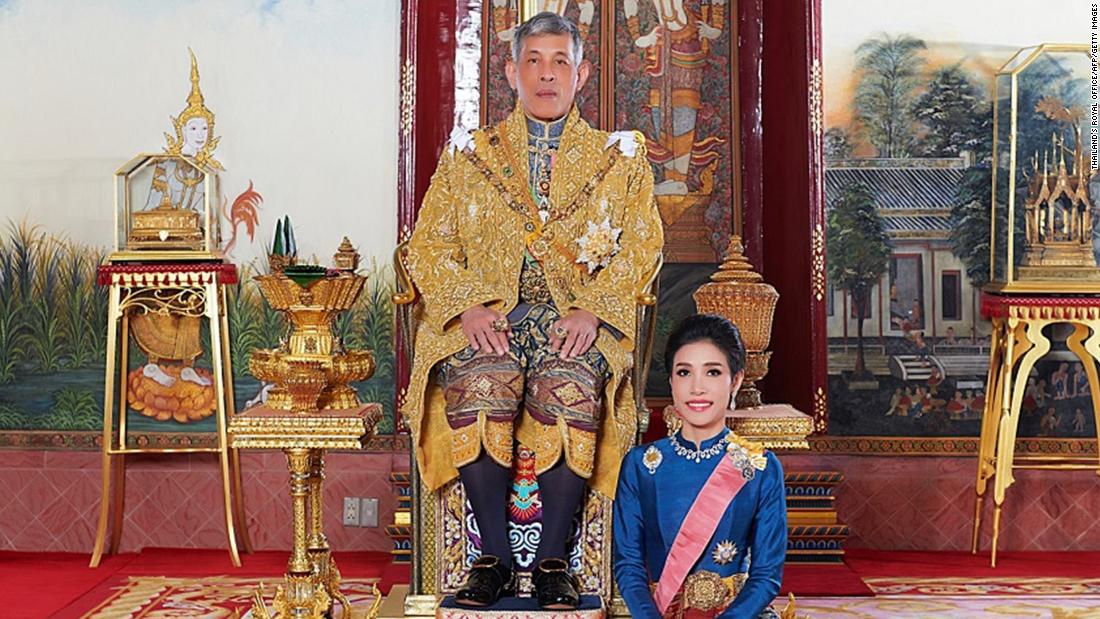 The Thai Royal Household said in an official notice that all titles, military ranks and decorations were returned to Sineenat Wongvajirapakdi after she was found “untainted,” implying that she was innocent of previous accusations.

She was accused nearly a year ago of trying to usurp power and prestige from the queen. Sineenat, 35, had previously attempted to obstruct the King’s wife, Queen Suthida Vajiralongkorn Na Ayudhya from being crowned, and had asked to be appointed to the role instead, a royal notice at the time said.

“It is regarded as if she was not stripped of her royal status, her royal military position and military rank and all her royal decorations were never recalled before,” the latest announcement read.

Details surrounding her reappointment are scant. Similarly, it remains unknown where she spent the intervening months. Due to Thailand’s stringent lese majeste law, CNN has limits in reporting the full context surrounding the Thai monarchy and its palace intrigue. The law makes it illegal to insult or defame the king, queen, heir-apparent or regent, and convictions can carry a 15-year prison sentence. Since retired army general and current Prime Minister Prayut Chan-o-cha seized power in a military coup in 2014, hundreds of activists have been charged under sweeping laws such as sedition or lese majeste.

Those laws do not appear to have deterred Thais from discussing Sineenat’s royal reemergence on social media. The phrase “free of blemish” was the top trend on Twitter in Thailand Thursday morning, as was the hashtag “ReformTheMonarchy.”

Sineenat is the first royal consort in nearly a century. She was a former army nurse who served in the King’s royal bodyguard unit, and held the military ranking of major general. She spent time in the military undertaking courses in jungle warfare and piloting, according to state broadcaster Thai PBS.

After being named royal consort in July 2019, she held the post for only three months before being stripped of her titles.

While it’s unclear why Sineenat is being reinstated now, it comes at a time of political upheaval.

Thousands of Thais protested last month to demand democratic reforms, and among them were a small but increasingly vocal group that is calling for changes to the monarchy. Expressing any dissatisfaction with the Thai royal family has long been considered verboten, radical and even dangerous — and not just because of the lese majeste laws. The institution is revered with almost religious fervor by many Thais.

The father of Vajiralongkorn, the late King Bhumibol Adulyadej, reigned for 70 years and was widely seen as a stable father figure who navigated the country through decades of coups and political unrest. He was also beloved by many for his work to improve the lives of ordinary people.

His son, Vajiralongkorn, who assumed the throne in 2016 and was crowned in May 2019, doesn’t hold that same respect or moral authority.

Vajiralongkorn is believed to spend much of his time overseas and has been largely absent from public life in Thailand as the country grappled with the coronavirus pandemic. On Wednesday, Thailand marked 100 consecutive days with no locally transmitted Covid-19 infections.

Although the absolute monarchy was abolished in Thailand in 1932, the monarch still wields significant political influence. Thais are still expected to follow a long tradition of worshiping the royal institution.

“The monarchy is revered, you have to love it unconditionally,” said Pavin Chachavalpongpun, an exiled Thai dissident who is now an associate professor at the Center for Southeast Asian Studies at Kyoto University.

An estimated 10,000 anti-government protesters young and old packed Bangkok’s Democracy Monument on August 16, calling for democratic reforms, changes to the military-written constitution and for the dissolution of parliament.

Grievances ones whispered in private are now being chanted in public.

However, experts say the calls for monarchical reform could clash with those seeking changes to government — they could could alienate large numbers of protesters. In July, Prime Minister Prayut said he was “worried and concerned about this movement” and warned protesters against violating the monarchy.

“I feel for our children, youths and university students and I also share their parents’ worries too. But there must be a vigilance about violations, I think people won’t tolerate it and allow an incident like this to happen again,” he said.

Prayut’s military-backed ruling coalition has promised to restore stability to a nation rocked by decades of coups and political crises, but many of the country’s young people feel Prayut’s government has done little to improve their economic prospects, restore democracy, or build confidence in the people.

Young people turned out to vote en masse in 2019, hoping to bring new, progressive, pro-democracy parties into power. But they were thwarted in part by a military-drafted constitution that enabled the generals to keep hold of power via the Senate led by an unelected Prime Minister.

Philippines’ first Olympic gold medalist was once a target of Duterte