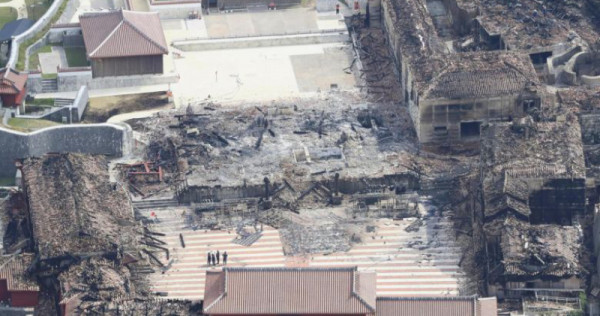 TOKYO – One month after a fire broke out at Shuri Castle in Naha, the authorities are still conducting investigations to establish the cause of the blaze.

The central and prefectural governments are hoping for a swift reconstruction, but many problems are yet to be solved.

Seven buildings, including the main hall, at the castle – one of the most popular sightseeing sites in Okinawa Prefecture – were severely damaged in the fire, which broke out at around 2.40am local time on Oct 31.

At a press conference held last Friday (Nov 29) at the Okinawa prefectural government building, Mr Yoshikazu Shimabukuro, a senior official of a red roof tile manufacturing group in Okinawa Prefecture who was involved in the last restoration of Shuri Castle about 30 years ago, said: “By a rough calculation, we will need 2,000 tonnes of clay soil to make 500,000 tiles for the roofs (of the reconstructed buildings). The question is whether we can secure the raw materials.”

Red roof tiles are a symbol of Shuri Castle. According to the Okinawa Industrial Technology Centre, the tiles are made from Kogachi clay soil from Nago in the prefecture.

The material was chosen after evaluating the fire resistance and colour of tiles made from clay soil from four locations in the prefecture. However, an official said it might not be possible to get soil from the same area to produce the tiles.

The prefectural government plans to reconstruct the buildings using wood. About 150 hinoki trees from Taiwan were used when the building was last reconstructed after World War II.

However, it will be difficult to procure timber from Taiwan this time, as logging in natural forests is prohibited on the island, according to the Taipei Economic and Cultural Representative Office in Japan, which functions as a de facto embassy.

However, one of the specialists involved in the previous reconstruction said: “Because cedar is softer than hinoki, I think it is more susceptible to rain damage.”

Since the fire, more than one billion yen (S$12.5 million) has been donated to the Okinawa prefectural and Naha city governments.

Okinawan people have an emotional attachment to the castle, which was restored after being destroyed by fire during the Battle of Okinawa in World War II.

Although entry to the site is still restricted, the garden path between the Kyukeimon gate on the north side of the castle and Uinomo Park on the east side, and the area in front of the Kobikimon gate were reopened to the public last Saturday.

“When I came here before, the contrast between the bright red buildings and the blue sky really impressed me,” said a 17-year-old girl from Yaizu, Shizuoka Prefecture, who was visiting the site on a high school excursion. “I want to see the site restored someday.”

Japan can act as a bridge between US and China: Foreign Minister Motegi, East Asia News & Top Stories

Star Wars: Terminally ill father gets to watch The Rise Of Skywalker early with his family at hospice | Ents & Arts News

India’s plan to divest state-owned companies is ‘back on track’, says top official

Beijing could tighten its grip on Hong Kong through electoral reforms

Star Wars: Terminally ill father gets to watch The Rise Of Skywalker early with his family at hospice | Ents & Arts News