Music, podcasts, and audiobooks to listen to while working from home

by Nina
in Technology
22 min read
0 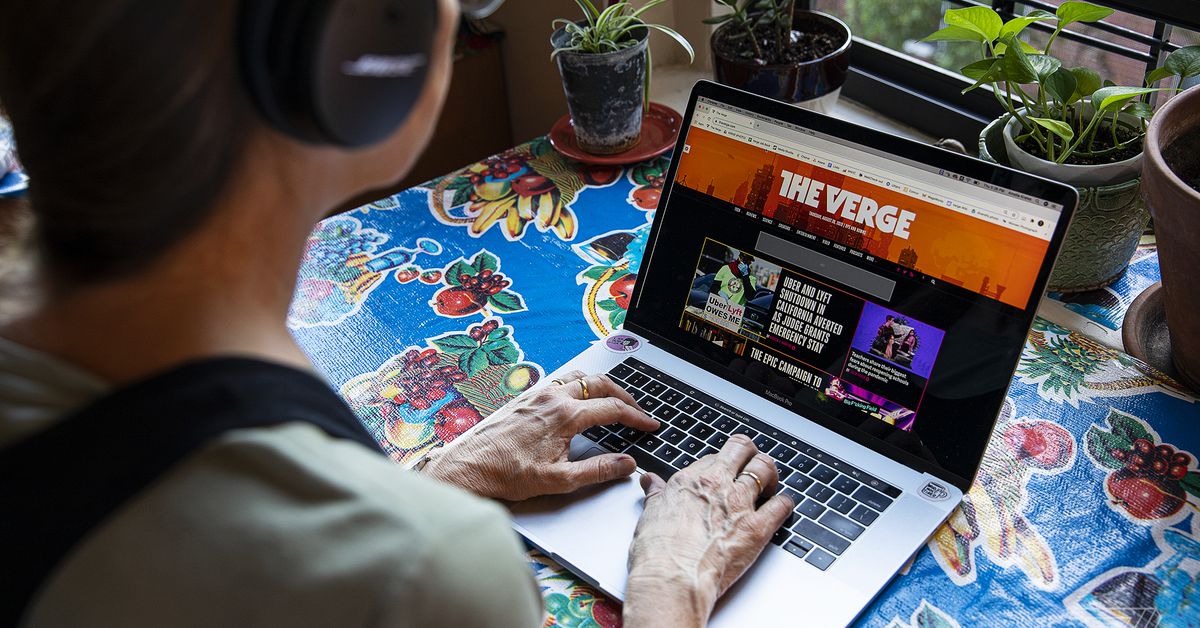 If you’re used to working in an office full of coworkers, but are now forced to labor from home, you may be feeling that things are a little quiet — too quiet. The solution might be to listen to whatever music, talk, or other background audio can keep your spirits up and your attention focused.

You may be listening to the same music or podcasts that you listened to through your headphones in the office. Or you may have decided you need something completely different to get you through your work-at-home days.

We polled the staff of The Verge to find out what what they are listening to during working hours, be it a podcast, an album, a favorite musician, a music genre, whatever. Here’s what they told us. Read on — and who knows? You might be motivated to try a whole new audio experience.

Write to a mood

In the morning, I listen to the Brian Lehrer Show on my local NPR station. He’s my favorite political commentator; he is laid back and non-confrontational, and open to opposing opinions while making his own very clear when necessary. He deals with both local and national issues, but always makes them relevant to his NYC audience. He’s a sane voice in an insane world, so I find him very comforting.

In the afternoon, I might choose from a whole range of musical genres, but my main thing is (yes, I admit it) Broadway musicals (Spotify / Apple Music / Amazon Music). My favorites are Sondheim, Bernstein, and Gilbert and Sullivan (okay, they’re officially operetta, but let’s not nitpick), but I’ll also go for Irving Berlin, George Gershwin (Porgy and Bess: musical, operetta, or opera?), Kurt Weill, Rogers and Hart, and Lin-Manuel Miranda. If I’m working on something that needs a lot of concentration, then I may segue to a classical music station on Spotify, but musicals cheer me up and keep me alert, which is something that is always helpful these days. —Barbara Krasnoff, Reviews editor

Stay away from English

When I was young I used to listen to Terry Pratchett’s Discworld audiobooks every night as I went to sleep. I had the books on tape along with a bulky silver CD/tape player that was the first “adult” piece of technology I owned. If I close my eyes I can still remember the click-clack of fitting a tape in place and the feeling of lying in bed while the player whirred away in the darkness of my room like an animal. Every now and again it used to go ker-klunk as the tape turned over in the tray (the height of technological sophistication back then, I assure you).

I don’t listen to anything while working now. In fact, I hate noise when writing and wear ear plugs most of the time. But as lockdown began I started buying Discworld audiobooks (Amazon) on my phone once more and now I’m addicted. I listen to them when exercising and in the evening as a way to wind down and I listen in bed. They’re comfort food, I know, and hardly challenging material. But the stories hold up remarkably well and I find Pratchett’s cynical but affectionate take on human nature as grounding now as I did back then. People can be bad, says Pratchett, but more often than not they’re scared or confused. It’s a good message, though I still miss the whirr of the tape. —James Vincent, Senior reporter

I usually can’t write and listen to music in the background. I find I get distracted far too easily, and hearing any lyrics usually just jumbles my thoughts with what I’m trying to write. But every once in a while, I use music to get into a zone, and I most often pull that off by listening to *pushes up glasses* video game soundtracks.

Recently, I’ve been gravitating toward compilations of music from Final Fantasy VII Remake. I thought Square-Enix did a beautiful job with the soundtrack in that game. Every once in a while, I’ll turn on the Clock Town music from The Legend of Zelda: Majora’s Mask, picking whichever of the three variations best suits my mood that day. (Day 1 and Day 2 are pretty calming, while Day 3 has a foreboding sense of urgency that sometimes gives me the kick in the pants I need to finish a big project.) And sometimes I just search for “[game name] music + extended” on YouTube to get extra-long tracks of music from that game.

I had never consciously thought about why I can sometimes work while listening to game music, but it occurred to me while writing this blurb that most video game music is already designed to be something that loops ambiently in the background of a virtual world while I’m focused on another task. Maybe that’s why I can sometimes deploy it for tasks in the real world, too. —Jay Peters, news writer

I so envy people who can listen to podcasts while working; I need all my focus on one or the other, and listening to someone talk is too distracting. Sometimes if I really need to hunker down (like on deadline) I’ll put on the noise-canceling headphones and listen to electronica, relying on Spotify for recommendations, but it has to be music with few or no lyrics. Paul Kalkbrenner (Spotify / Apple Music / Amazon Music) has been heavy in the rotation recently. But really the soundtrack I use most often when working remotely is keeping the TV on at a low volume on a news channel. I think it’s because that level of noise simulates a newsroom environment that lets me get into work brain more easily. —Kim Lyons, weekend editor

I have the kind of brain that can’t function without music playing in the background. But if I’m working, my brain needs something primarily without lyrics, whether that’s classical, jazz, soundscapes, or even the much fawned over (but ultimately pretty boring) “lofi hip hop beats to relax/study to.” I’m terrible at finding new musicians, and I don’t want to fully hand over the keys to Spotify’s algorithm, so I subscribe to a couple of newsletters for my recommendations.

Two of the best are Flow State and Caesura Letter. Flow State, which is run “semi-anonymously by a guy based in New York named Marcus,” sends you two hours worth of music every day that’s great for working. Caesura Letter is by a friend of mine named Matt Pinto who also records music under the moniker Healthy Lives (Spotify / Apple Music / Amazon Music). He excels at internet crate-digging, whether it’s trance compilations from the early 90s or an ambient office noises soundboard for those who miss being around their coworkers. (Like me.)

If I’m outside riding my bike or back home doing dishes, I throw on a podcast. Lately I’ve been enjoying Binge Mode by the Ringer, The Prof G Show with Scott Galloway, and The War on Cars. —Andrew J. Hawkins, senior reporter

Most of the day I’m not listening to any music or audio, because I frequently have to jump on calls or watch in-progress video that our video team produces before we publish it. But when I need to really focus and get some work done, my music of choice is the ambient, electronic soundscapes of Tycho (Spotify / Apple Music / Amazon Music), an artist who may be familiar to some long-time Verge readers.

For the past decade it’s been my go-to music whenever I need to tune out the world and jam out a writing assignment (like I am doing with this right now). Tycho’s music has just the right amount of soothing sounds and driving beats to keep me focused on what I need to get done and not actually fall asleep.

I most prefer the 2011 album Dive, but oftentimes I just put Spotify’s This is Tycho playlist or the Tycho radio station on and let it play. I just have to skip the newer tracks that have incorporated vocals — they are fine, but they don’t have the productivity juice I crave.

The final piece to this puzzle is a set of comfortable, good sounding, noise canceling headphones that I can use to envelope myself in the soundforms. My current choice are Microsoft’s Surface Headphones 2. —Dan Seifert, Deputy editor

I’ve found chill, ambient music essential to working from home. I want something cool, but my brain is hardwired to key in on lyrics, so vocals are a problem. My go-to for nearly 20 years has been Soma.fm, an internet radio station out of San Francisco that got its start way back in 1999. Soma.fm has a bunch of different stations. Groove Salad is my go-to, and Indie Pop Rocks is was the best way for me to find new music in the early 2000s.

But my favorite is probably Secret Agent, which is like a late 60’s James Bond vibe (minus the misogyny) translated through chillwave. Don’t worry if none of that makes sense, just know it is very cool and you should check it out.

You can listen in a web browser, but try looking around for a dedicated internet music player if you want more convenient controls — I use Triode from iconfactory. The nice thing about using internet radio for radio is that your plug-in-and-focus music is kept siloed from your Spotify algorithm. —Dieter Bohn, executive editor

As the oldest of five children, growing up it was always noisy. There was always conversation, oftentimes loud — sometimes fights — even when it was time to study for a test, or focus on schoolwork. Hence, I have developed this need for constant background noise in order to focus. Nothing is as distracting as a quiet office to me, even more disquieting is a quiet home. My solution: morning television. When I work, I have GMA, or The Today Show in the background. I have my coffee with the ladies of The View, and if I have a particularly tough day of work ahead, Wendy Williams becomes my office mate. The combination of heartwarming stories and bickering puts me right in the zone, and it’s comforting to have chatter in the background and feel like you’re with people. The afternoons get a little harder for me right until the problematic Dr. Oz or Ellen come on… too bad that the Harry Connick Jr. talk show didn’t work out. —Esther Cohen, Social media manager

Podcasts, classical music, video game music, trance, white noise: I’ve tried it all, and none of it seems to matter one bit. Personally, I go into a state of hyperfocus during most of my work day, and I don’t wind up “hearing” any of it — unless it’s so interesting or such a devastating earworm that I wind up hyperfocused on that instead. For me, it’s more about avoiding Baby Shark than proactively finding something to listen to.

On the plus side, it means I don’t have to wear headphones at work! —Sean Hollister, Senior news editor