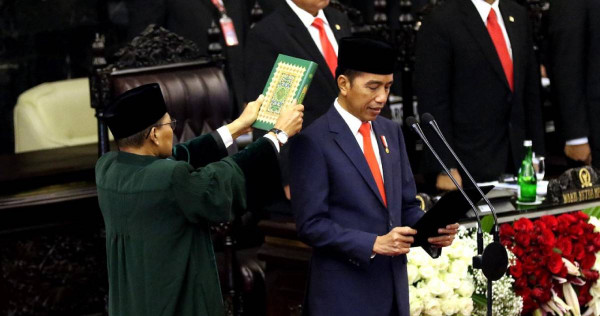 
Human rights activists have lambasted President Joko “Jokowi” Widodo for failing to address human rights issues in his inauguration speech on Sunday, pointing out that he instead focused on the country’s economic development.

Foundation of the Indonesian Legal Aid Institute (YLBHI) director Asfinawati said neglecting to even mention the issues at such an important event showed that Jokowi did not understand the importance of them.

According to the YLBHI, human rights violations increased under Jokowi during his first term. Moreover, the organisation also noted that law enforcement institutions tasked with protecting the public instead had shown excessive force.

“The President is only focusing on economic development and tells people not to focus on process, but rather on results. This statement is dangerous since the President’s speech identified the Indonesian people as nothing but a resource,” Asfinawati said on Tuesday.

She also lamented that it seemed as if the government only placed its focus on developing economic infrastructure while democratic infrastructure grew weaker, being dragged down by a political system that only devoted itself to appeasing the oligarch’s needs while ignoring the people’s rights altogether.

“This indicates that Jokowi doesn’t care about law enforcement and human rights issues,” she said.

Director of the Institute for Criminal Justice Reform (ICJR) Anggara echoed a similar sentiment, saying that Jokowi needed to be reminded of his promises during the campaign trail when he was seeking reelection in the 2019 presidential election.

The ICJR also urged the President to not exclude human rights in dialogue about the nation’s economy as the issue was important to creating a system that was conducive to economic growth.

“It is important to know that Indonesia is still weak when it comes to law enforcement implementation,” Anggara said in a statement to The Jakarta Post, referring to data from the World Justice Report (WJP) in 2015 that gave Indonesia a law implementation score of 0.52, putting it in the weak category.

Moreover, economic growth could also be hampered if the President fails to prioritize law enforcement and human rights, Anggara said.

“We want to remind the President to pay full attention to human rights protection and law reform upon composing strategies to encourage the nation’s economic growth,” Anggara said.

He also highlighted that Jokowi made a pledge in September last year that he promised to respect and protect human rights, eradicate and prevent corruption and improve the law enforcement process.

However, Indonesian Democratic Party of Struggle (PDI-P) secretary-general Hasto Kristiyanto came to Jokowi’s defence, saying that the President only delivered his brief vision for Indonesia’s future.

“It’s a vision that we must undergo as a nation,” Hasto said as quoted by tempo.com on Monday.