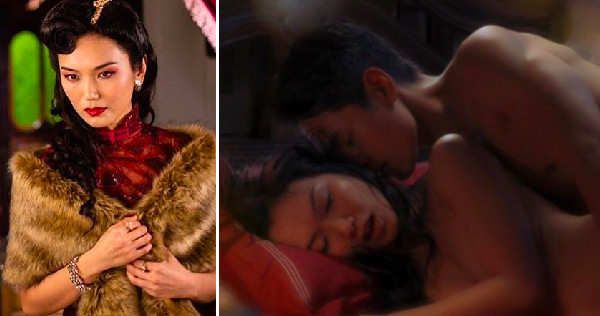 Joanne Peh is baring it all in her new drama.

The 36-year-old actress opened up about going nude for a bed scene in the Toggle series Last Madame in a revealing Instagram post today (Sept 26).

For Joanne, who plays the boss of a brothel in the show, her raunchiest role to date, it was not an easy decision.

Although no nudity was explicitly shown on-screen, the scene in the 12-part series still gets pretty hot and heavy.

For Joanne, who has not had so much as a kiss scene since her marriage to actor Qi Yuwu in 2014, one of her concerns was her nerves over “how it would look on-screen”, but she eventually took the plunge for the sake of the show.

[link in profile] It took me a long time to decide if I would go nude for our bed scene in Last Madame. A story set in a brothel in the 1930s, we can’t shy away from sex. The tension between my character and Inspector Mak began the moment we met and the flirting continued. It was bound to happen, it was just a matter of when and where. ⁣⁣ ⁣⁣ It was a big step for me as an actress to go bare in front of the production crew and my fellow actor. But I decided to do this because the context of the story and character motivations were fully justified. It wasn’t just about love-making, it was my character learning to love and trust again, and a transitional milestone for both our characters. I had full trust in my co-star @ijeffchou, respect for my director and confidence in the camera crew before saying yes to my EP Jean. ⁣⁣ ⁣⁣ I was nervous of how it would look on screen because so many things could go wrong, but when I finally saw the EP’s cut, I was moved, and realised in that moment that I made the right decision. Because showing two bodies moving in unison captured the passions and inner conflict of the two characters so vividly, it pushed the show to a different level. ⁣⁣ ⁣⁣ You’re welcome @jeanthelionmum, now go search for Last Madame on Toggle’s homepage.

“It was a big step for me as an actress to go bare in front of the production crew and my fellow actor. But I decided to do this because the context of the story and character motivations were fully justified,” she wrote.

And we’re sure it didn’t hurt that her partner in the bed scene was hunky Taiwanese model Jeff Chou, who plays a police inspector in the show.

In an Instagram post that was deleted — possibly for showing too much skin — and re-uploaded today, Jeff revealed that his first time filming the scene with Joanne was “nerve-racking” and left him feeling “incredibly vulnerable”.

Despite Jeff and Joanne’s anxiety over the scene, it seems that their decision has paid off.

Joanne shared that she was moved after watching the scene and has no regrets.

“…Showing two bodies moving in unison captured the passions and inner conflict of the two characters so vividly, it pushed the show to a different level,” she wrote.

This may be Toggle’s first M18 drama and possibly the raciest local production in a while but don’t expect gratuitous sex scenes a la Game of Thrones.

Head writer and director Jean Yeo told 8 DAYS previously that the bed scenes were written to “show the life in a brothel authentically, and more importantly, show how women lived and were treated in the 1930s.”

The series tells the intertwining stories of Fung Lan, the last brothel owner in ’30s Singapore and her great-granddaughter, Chi Ling, who uncovers the family’s history in 2019 after inheriting a run-down shophouse.