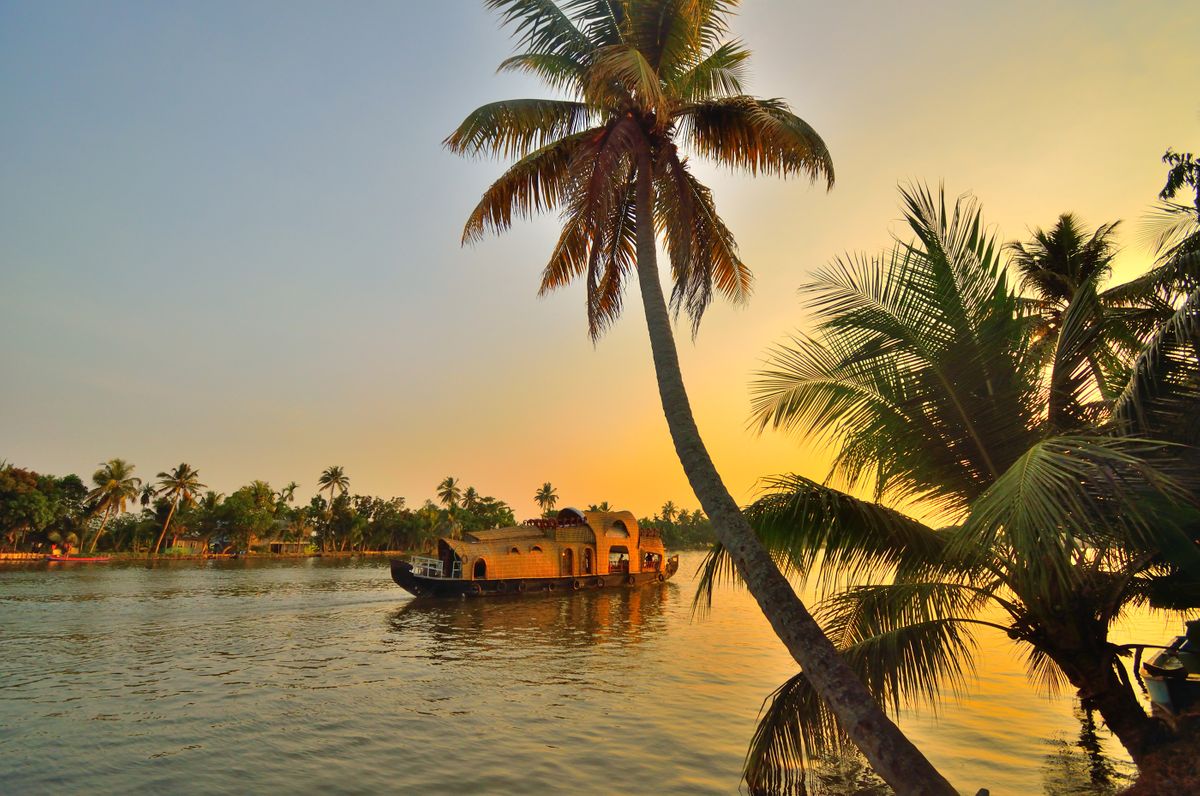 A network of lagoons and lakes, interconnected by a labyrinth of canals, rivers and inlets, the palm-fringed backwaters of Kerala are one of the most beautiful and laid-back places in India.

Life here follows more gentle rhythms, with fishermen pulling in nets, women washing pots at the side of the river and kids heading off to school in slender canoes. It is also a haven for wildlife, especially birds like kingfishers and fish eagles.

The backwaters are also famous for its traditional rice barges, distinctive wooden vessels especially designed to negotiate the waterways here.

Many have been converted into houseboats and staying on one is the ideal way to soak up life here. Offering surprisingly luxurious accommodation, many come with onboard chefs, skilled in cooking the local specialities.

Waking to the sound of the gently lapping waters in one of life’s simple joys. 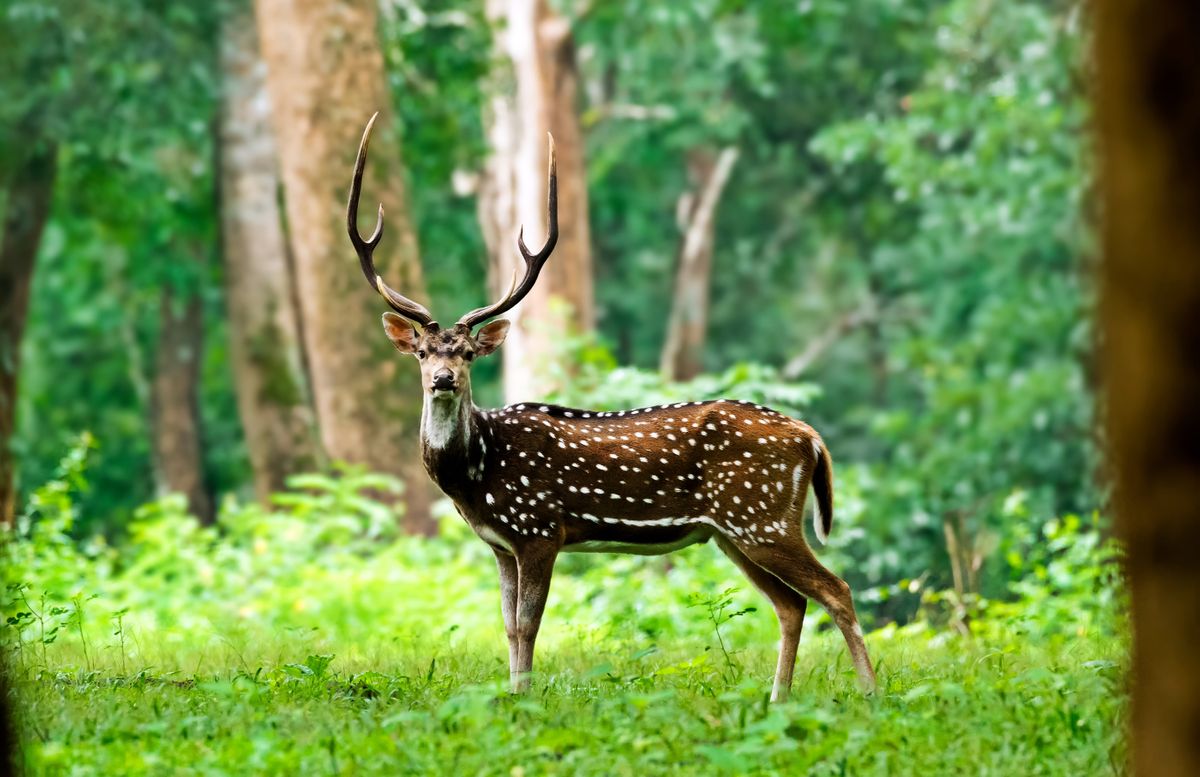 Kerala is rightly famous for its birdlife. Birdwatchers descend upon the region to catch a glimpse of Indian Koel, Loten’s Sunbird and Shikra and if they’re lucky, a Ceylon Frogmouth, a rare kind of owl.

The Mangalavanam Bird Sanctuary is perfect for birders keen to train their binoculars in a more intensive avian environment.

But with more than 25 wildlife sanctuaries and national parks, the region offers the opportunity to see other wildlife as well.

Kerala has two tiger sanctuaries, for example – Parambikulam and Periyar – where visitors can go on jeep safaris in search of the regal Bengal Tiger. There are six national parks, home to endangered species like the Indian sloth bear, lion-tailed macaque, Indian bison and Nilgiri tahir. 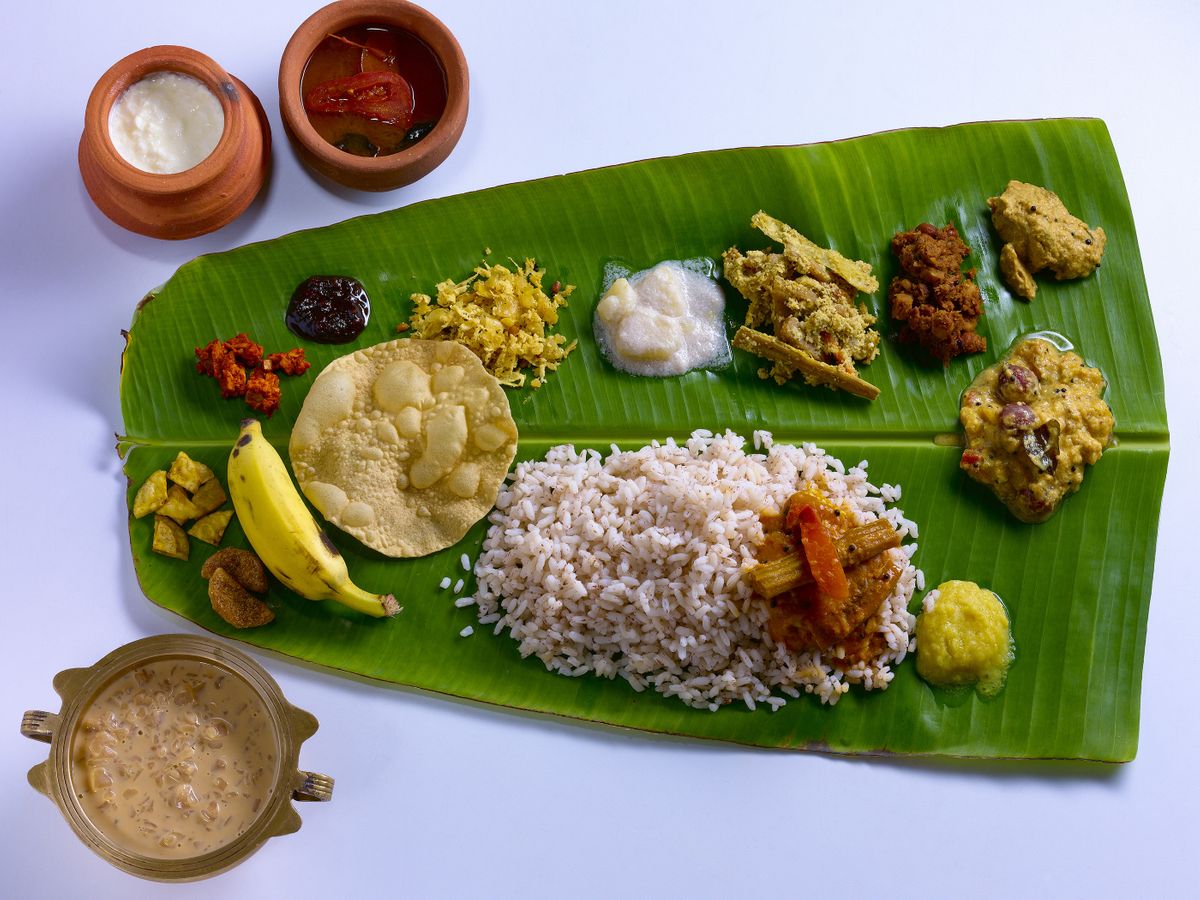 Keralan cuisine is very much influenced by its geography and is a delicious blend of super-fresh seafood, exotic spices and tropical ingredients. A delight for vegetarians and non-vegetarians alike.

Coconut milk is a vital ingredient here and people travel from all over India – and indeed the world – to savour its distinctive flavours.

Dishes you must try include appam with stew, puttu, ghee roast dosa with sambhar and karimeen pollichathu. But in all honesty, anything you order in Kerala with tantalise your tastebuds. Kerala is so closely associated with its extraordinary backwaters that many visitors are surprised that the region is home to some of India’s loveliest hill stations as well.

Tucked high in the east of the region, close to the Western Ghats ranges and often sitting 1,600m above sea level, these emerald green retreats offer a cool respite from the coastal heat.

Nestled at the concurrence of three rivers, Munnar is perhaps the most popular and is famous for its rolling tea gardens and tea museum.

It’s also the best place to spot a neelakurinji, a flower that only blooms once every 12 years. Athirapally is famous for its waterfalls while Thekkady is a great base for treks and shorter walks. 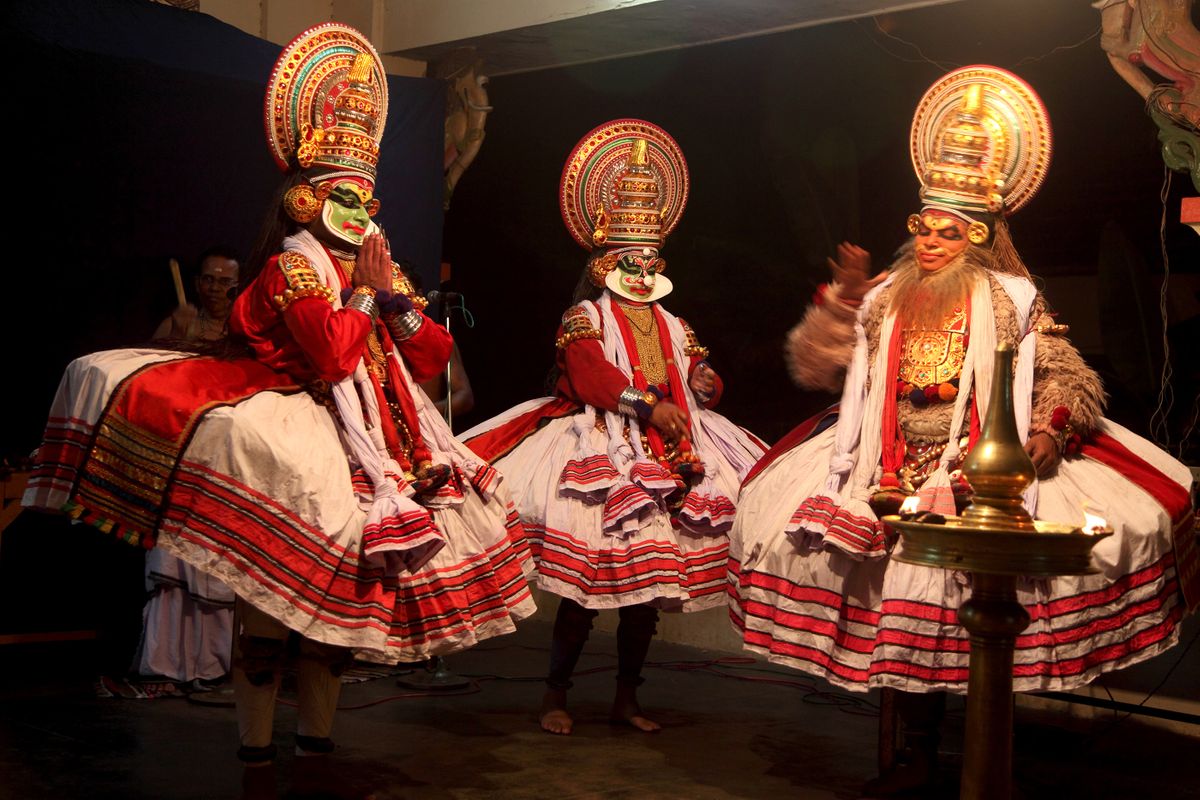 Kerala’s culture is as distinctive as its cuisine and has been similar influenced by the peoples and religions that have passed through.

A unique combination of both Indian and Dravidian culture, it is a vital part of every day life, reflected in buildings, martial arts, clothing and the cuisine.

The performing arts are hugely important in Keralan culture and the region has a well-preserved art and cultural heritage. Performances are as popular with locals as they are with visitors with Kathakali, a classical dance from the 17th century, and Chakyarkoothu, a kind of comedy satire, performed – and eagerly attended – throughout Kerala. 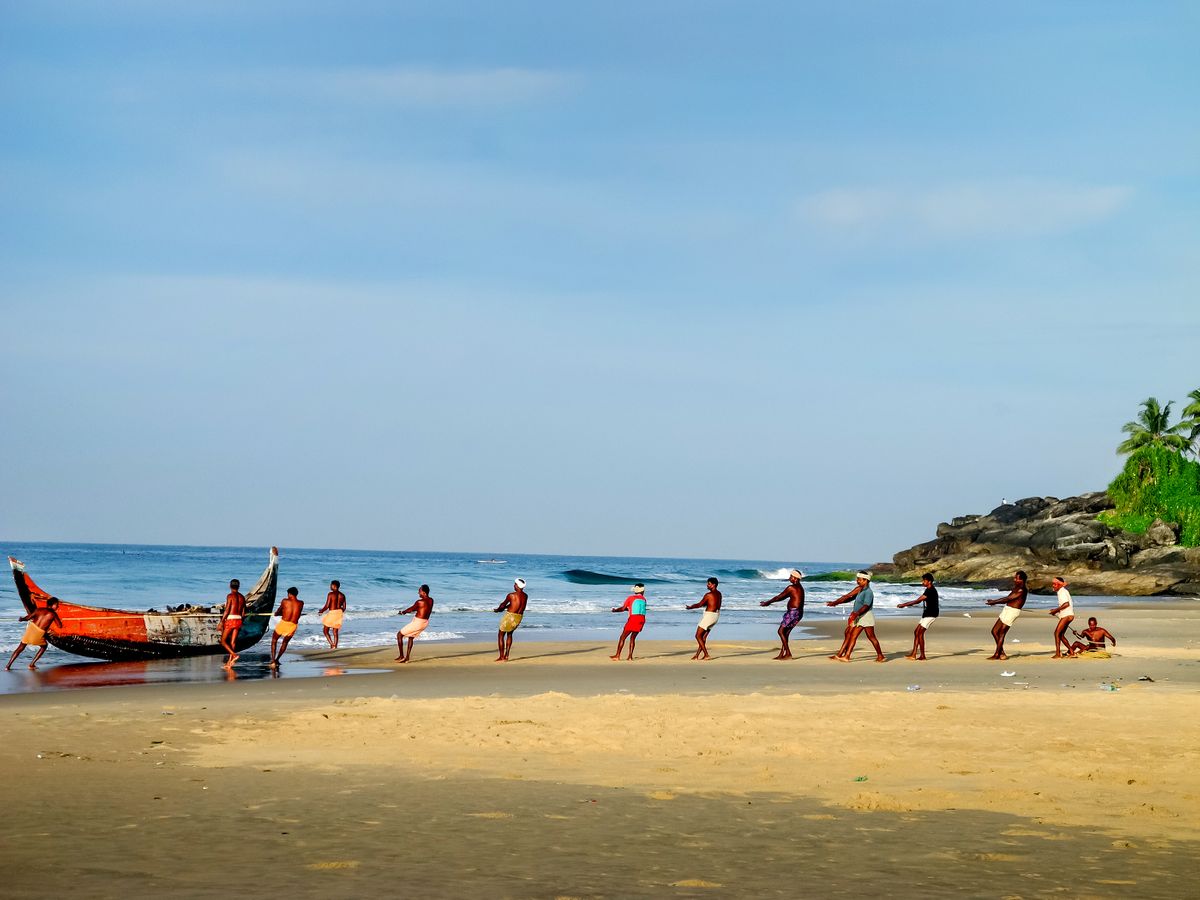 Situated on India’s tropical Malabar Coast, Kerala boasts nearly 600km of Arabian Sea shoreline. Many are long and sprawling and relatively deserted, making them an attractive alternative to the more famous – and busy – beaches of Goa to the north.

Each beach has a distinctive personality. Kovalam, with its famous and striped lighthouse is the most lively and the closest to a ‘Goan’ beach experience you’ll find in Kerala. Varkala is less crowded and great for chilling out.

Marari is ideal for those looking for serenity, courtesy of its resort specialising in Ayurveda treatments. While Kannur offers a real insight into local culture, with many of the small villages here holding traditional festivals and practising age-old crafts like handloom weaving.

Kappad, Cherai and Bekal beaches are worth checking out, too. 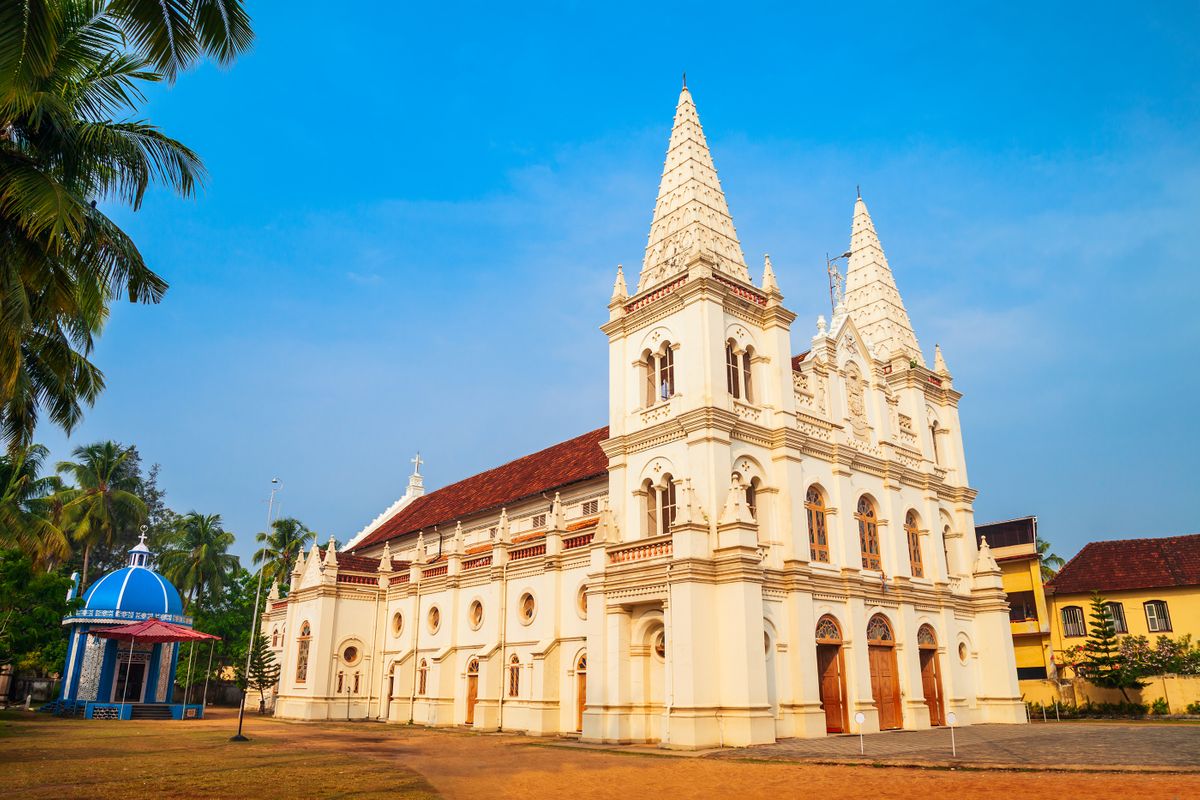 Don’t be fooled by Kerala’s laid-back vibe. This beautiful backwater has been coveted and fought over for centuries.

The ancient Greeks and Romans cherished its spices, especially pepper. The Tamils held it for five centuries and Arab traders were regular visitors. In colonial times the Dutch, Portuguese and the British laid claim to its lands and its peoples.

The result is that the region is dotted with impressive historical monuments, from forts at Bekal and Anchuthengu, palaces in the hills, Krishnapuram and at Padmanabhapuram and temples dotted everywhere.

The most impressive historical legacy, however is Fort Kochi, a labyrinth of colonial architecture left by all of its European conquers and the final resting place of the explorer Vasco De Gama.

By all means, check out the Dutch Palace and visit the Paradesi Synagogue and Santa Cruz Cathedral. But the true joy here is losing yourself in the chaotic lanes and surrounding your senses to the sights, sounds and smells that abound here.

How to get around Toyko: A Metro Masterclass

How to get around Toyko: A Metro Masterclass