A traditional procession through the streets of Yanesen (Shutterstock)

If the gleaming advertisements of Shinjuku and the whirring arcades of Akihabara all get a little too much, take a walk north-east, to Yanesen. Comprised of the Yanaka, Nezu and Sendagi neighbourhoods, the charming, peaceful district of Yanesen is a world away from the sensory overload of the city’s more boisterous areas.

Wander in any direction and you’ll be rewarded with quiet corners, ancient temples and age-old shops where life continues at a more gentle pace.

Here are 5 reasons you absolutely must explore Yanesen, Tokyo… Founded in the first century and moved to the area it is in now in the early 1700s, this is hands-down the most beautiful (and underrated) shrine in all of Tokyo.

Expect ornate wooden structures, a beautiful azalea garden, and dozens of bright orange torii gates leading up to a shrine dedicated to Inari (the goddess of rice and harvest). 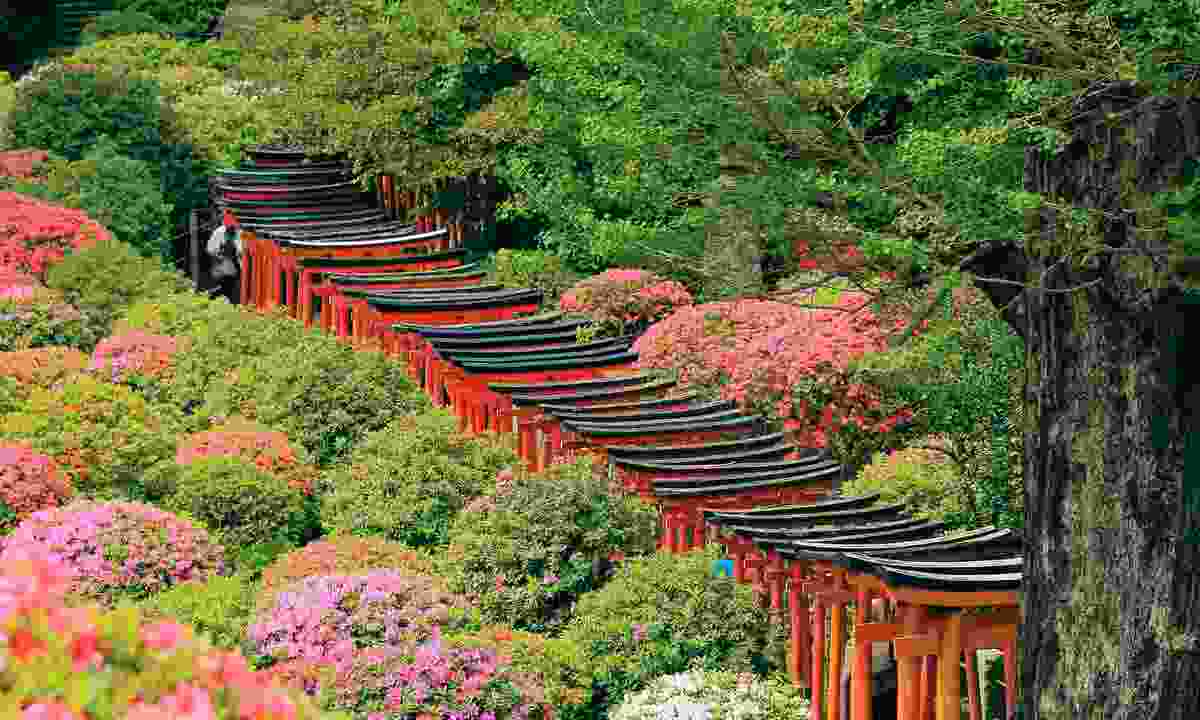 That’s why I love this shrine because there’s so much to see. Yes, the atmosphere is incredible, and yes, it is usually an oasis away from the bustling city. But if you only have a short time in Tokyo and aren’t able to make it out of the city, Nezu allows you to see a ‘best of’ shrine, in one compact location.

To stroll through the vermilion torii gates is to get away from the urban jungle and visit a local area untouched by the destruction of World War II. It’s an off-the-beaten-path wonder in one of the world’s biggest cities. 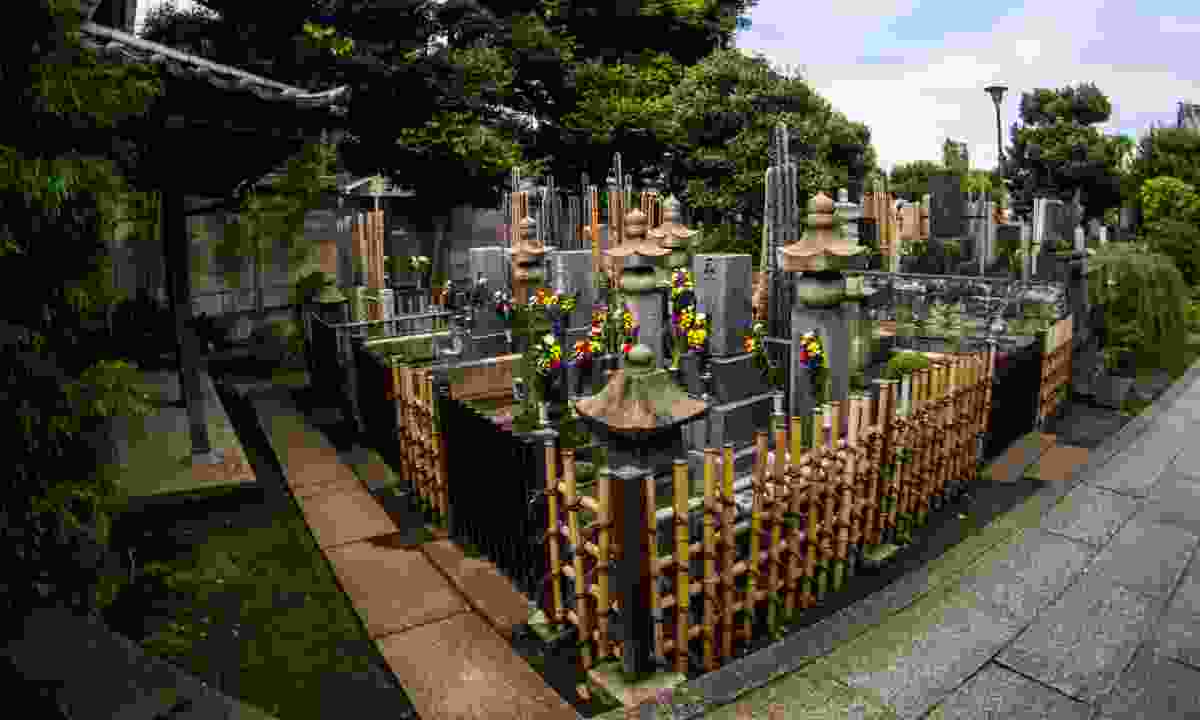 Yanaka Cemetery contains over 7,000 graves, and is one of the largest and most important graveyards in the country. It’s very atmospheric, and the resting place of several famous artists and warriors, most notably the last Tokugawa shogun, Yoshinobu.

The cemetery is also famous for it beautiful cherry blossoms, that transform its sombre tones to a riot of soft pinks every April. The delicate blossoms cover every path. The central street leading through the cemetery is known as Cherry Blossom Avenue. 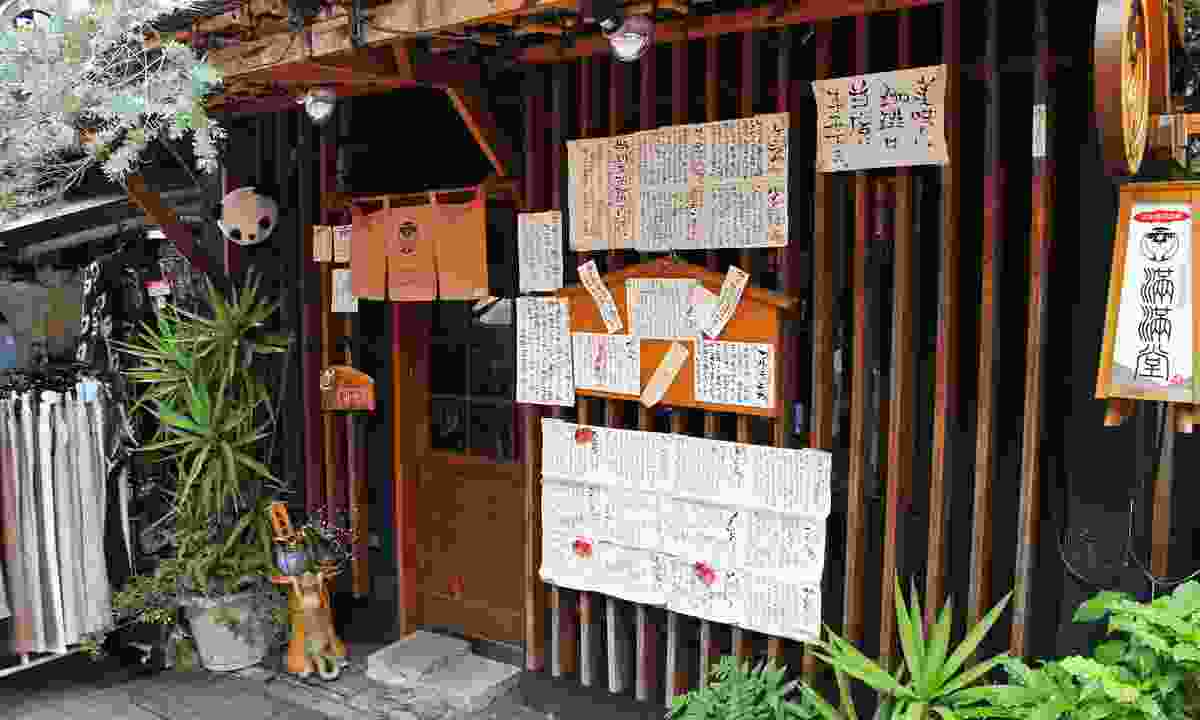 Yanesen is one of the few areas in Tokyo that survived the bombings in the World War II. It retains the old-style feel and architecture of pre-war Japan, which means the main street Yanaka Ginza is lined with dozens of small shops and boutiques, selling everything from pottery to traditional tea and senbei (rice crackers).

Senbei Shinsendo are one of the oldest and most popular rice cracker merchants, plying the locals with various senbei for over 100 years. Why do I love senbei? Well, because the toasted rice crackers are delicious, that’s why! 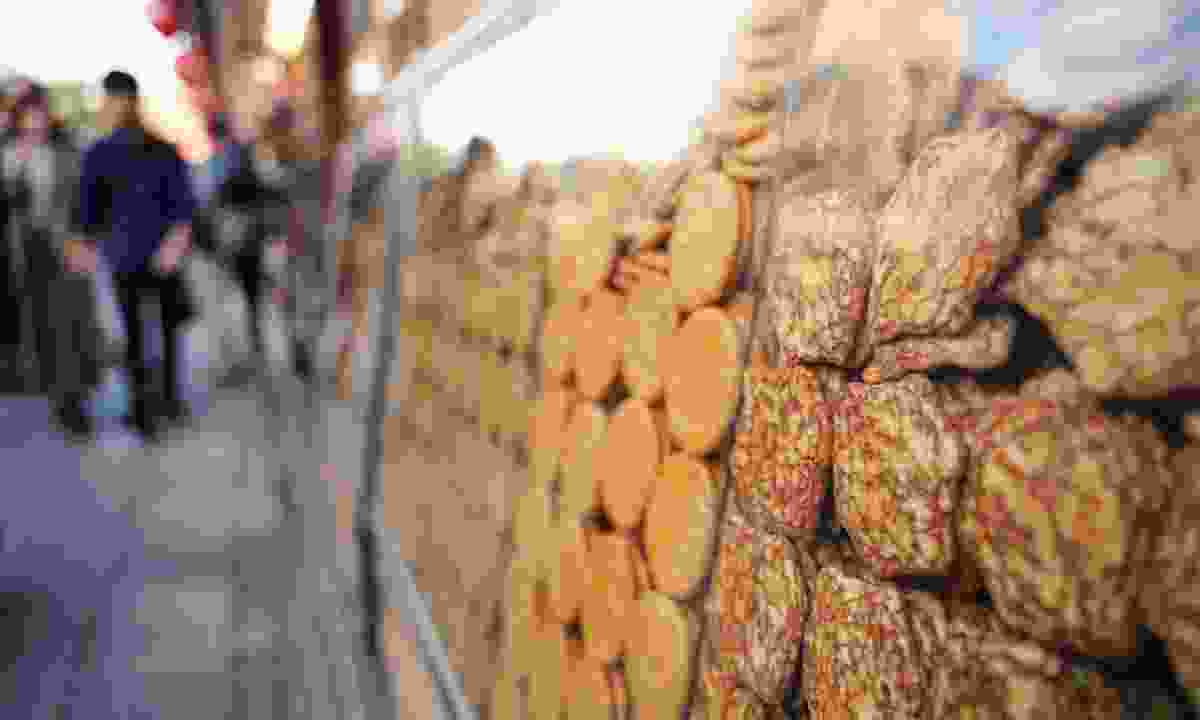 Toasted rice crackers are popular snacks found in most towns and areas. They were especially popular among pilgrims during the Edo Period (roughly 1600 to 1868) for a number of reasons.

Firstly, they’re portable snacks that you can eat as you go. Toasted rice lasts longer than regular rice balls, so you can pick one up and eat it later when you get a bit peckish. And because of its longer shelf life, if you were returning home after spending the whole day in the city, you could bring omiyage back to your family in the form of rice crackers and they’d still be delicious. They are the ultimate snack. 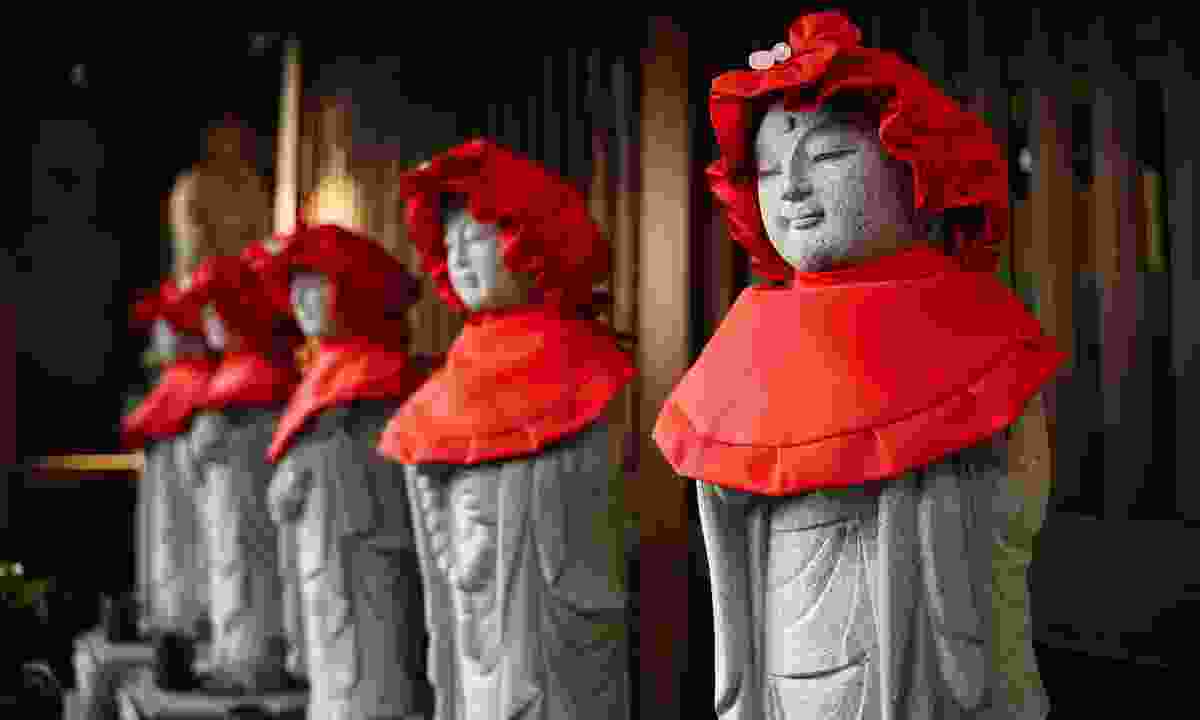 Statues of Jizo, protector of children, in a Yanesen temple (Shutterstock)

A small but beautiful and historic temple, Chokyuin played an important role during the Battle of Ueno, part of a short civil war in the 1860s between the Emperor and the Shōgun – otherwise known as a military ‘dictator’ – at the time.

The last Shōgun, or feudal general, hid out in the temples of the Yanaka area, including Chokyuin. You can still see bullet holes and sword marks on the gate – an intriguing reminder of one of the last great samurai battles. 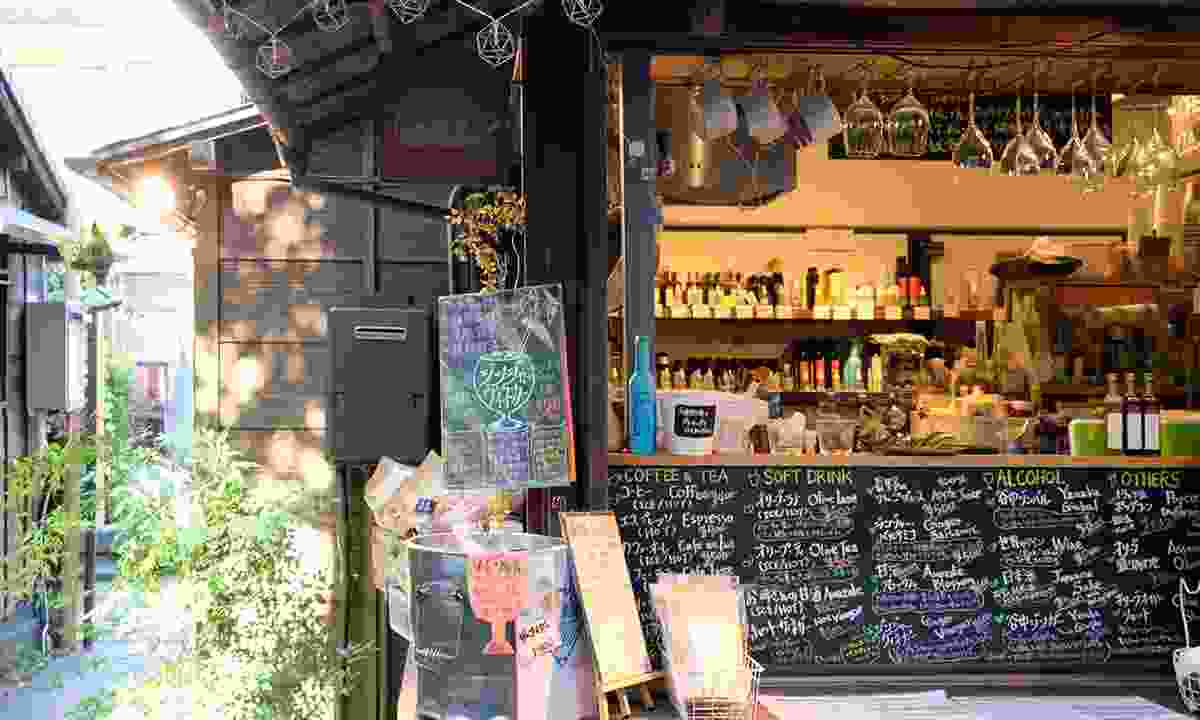 A compound consisting of three traditional wooden buildings, Ueno Sakuragi Atari has been transformed into various workshops and stores, while retaining its unique charm.

Built in the Showa era around 100 years ago, these buildings are a true throwback to when Japan was just starting to embrace the West. Wandering through, it almost feels as though like you’ve stepped back in time.

Here, you can shop for traditional salt and drink a craft beer while taking in the old buildings. Be sure to try the craft olive oil at OshiOlive, too.

And a bonus tip, just for luck! You can also fit in a visit to Rikugien Garden in Bunkyō-ku for a tranquil wander through one of Tokyo’s most scenic and peaceful gardens. It’s so serene, you’d struggle to believe its nestled in one of the biggest cities on Earth.

The garden was built in 1700 and reproduces scenes from the 88 most popular poems of the day. In that regard, I would call it Japan’s hipster garden.

Travel inspiration: Back to Cornwall and the English Riviera

Valve: Campo Santo’s In the Valley of Gods ‘on hold’

Travel inspiration: Back to Cornwall and the English Riviera

10 of the best coworking spaces in Brooklyn

Valve: Campo Santo’s In the Valley of Gods ‘on hold’